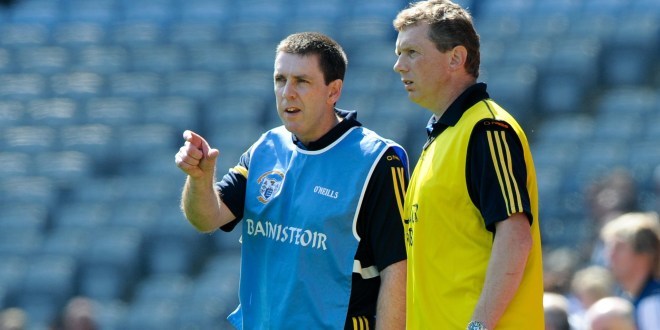 It’s official. Donal Moloney and Gerry O’Connor are the new joint managers of the Clare senior hurling team. At the October meeting of Clare GAA at the county’s centre of excellence in Caherlohan this evening, they were unanimously appointed for a two year term on the proposition of Dan Treacy (Scariff), seconded by Josie Nevin (Eire Og).

There was no indication as to who will be in their backroom team. Board chairman Joe Cooney told the delegates that the make up of a number of the management teams has yet to be finalised. It is understood that Donal Og Cusack will be continuing as team coach. Limerick man Liam Cronin who has coached Eire Og this season will be in the set up along with Jimmy Browne from Clonlara who was a member of the backroom team with Moloney and O’Connor when they led Clare to three Munster and All-Ireland under 21 titles. Ciaran Corcoran from Broadford, a member of the under 21 backroom team under Moloney for the past two years is also understood to be part of the new set up

Sean Doyle from Bodyke was confirmed as the new minor hurling manager. Again, there was no announcement as to his backroom team but it will include Cyril Lyons (Ruan) as team coach and Gerry McIntyre from Wolfe Tones while Broadford’s Aonghus OBrien is also been linked to a role in the set up

Clubs have until 5p.m. on Monday October 24 to submit nominations to the county secretary for the post of under 21 hurling manager.

Wishing the new management well and congratulating the outgoing management for their efforts, Clooney-Quin delegate John Skehan asked for a clear cup policy with regard to the availability of players on the inter county training squad to their clubs. He asked that inter county training and challenges not be arranged for the same day as hurling league games