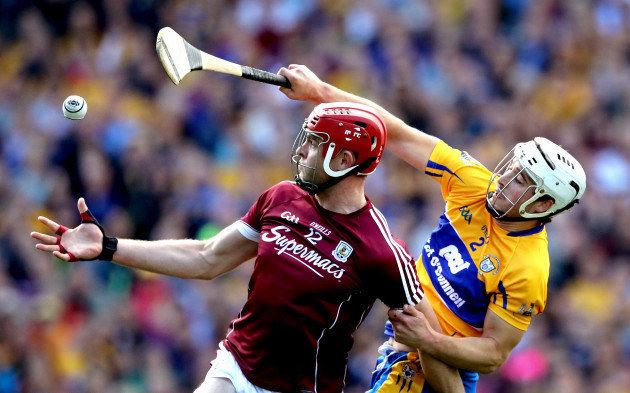 AFTER OVER A hundred minutes of action, it ended as it had started with Galway and Clare inseparable.

Substitute Jason McCarthy was the hero, snapping over a point after Clare had patiently worked the ball upfield deep into the additional minutes of extra-time. It appeared as if Johnny Coen, who had missed a chance at the end of normal time, had notched the critical point for Galway to propel them into an All-Ireland final moments before.

But Clare, terrific throughout in testing the reigning Liam MacCarthy Cup holders, got a positive result that their performance merited. A replay beckons next weekend. Galway will hope for positive news on the fitness of Gearoid McInerney and Joe Canning, two lynchpins of their side that limped off with injuries.

Galway underlined their early dominance when pouncing for the first goal of the game in the 15th minute. Johnny Glynn’s presence caused difficulties for the Clare rearguard and after they failed to clear their lines, the sliotar spun loose for Conor Cooney to collect and charge through before finishing neatly to the net. A Canning point a minute later had them 1-7 to 0-1 in front.

But Galway’s work was undone regularly by their shooting in front of the posts. They had amassed 12 wides by half-time and as a result only enjoyed a 1-10 to 0-9 advantage.

Clare got themselves back into contention, aided by Colm Galvin’s form when he moved to a sweeper role. They hit five points on the bounce between the 18th and 28th minutes, with Galway mustering no reply.

Clare were magnificent in the second half as they wiped out that four-point interval advantage Galway possessed. John Conlon again emerged as their talisman by raising four white flags from play, despite the close attentions of Galway’s defensive cornerstone Daithi Burke. Conlon brought them level in the 53rd minute, Peter Duggan did likewise in the 55th minute and the teams were locked together once more when Ian Galvin scored in the 62nd minute.

However it appeared as if Galway had made a decisive break when Canning, Niall Burke and David Burke all tacked on scores to push them three ahead. Clare came strong when it mattered with Tony Kelly, Conlon and Duggan weighing in with the points that sent this to extra-time.

In the additional periods, Galway went in front 1-26 to 0-27 at the midway mark. Then Clare were spurred on by an 82nd minute goal as Aron Shanagher lashed a shot to the net. It was frenetic stuff. Jason Flynn pointing to bring Galway level, Duggan and Shane O’Donnell nudging Clare two clear.

Galway came strong again with Flynn (2) and Coen contributing the points. They had a foot in the final before McCarthy salvaged something for Clare. Round two next Sunday in Thurles.