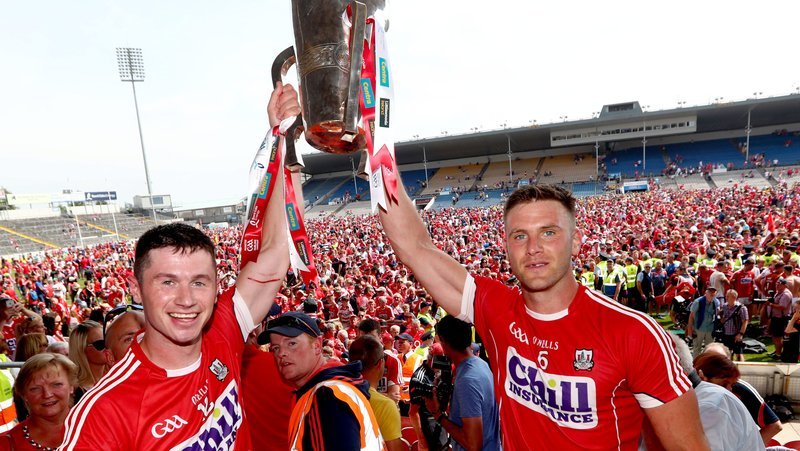 The Rebels did not lead for the first time until the 48th minute but once they hit the front the champions pushed on to retain their title with an accomplished display.

Clare never gave up and a late Ian Galvin goal gave them hope but Cork held on for a deserved success with Harnedy finishing with 1-04 from play.

The sides were level four times in the opening quarter before Clare surged in front and at one stage opened up an eight-point lead.

But Cork rallied before the interval and cut the gap to 2-11 to 1-10 by the end of an exciting opening half.

John Conlon was superb for Clare, shooting 0-05 by half-time in a superb display from the Clonlara clubman.

The sides were deadlocked at 0-05 apiece when Tony Kelly raced through to set up David Reidy and the Éire Óg clubman finished low to the net.

Conlon and Patrick Horgan exchanged points but two more efforts from Peter Duggan made it 1-08 to 0-06 after 22 minutes.

Horgan kept Cork in touch with three frees after Duggan had landed another at the other end.

Conlon continued to torment the Rebels’ defence but it was Duggan who struck the next biggest blow when he superbly connected overhead to dispatch a long from free from his goalkeeper Donal Tuohy to the net after 33 minutes.

Conlon struck his fifth point to make it 2-11 to 0-09 but Cork rallied before the break.

Captain Harnedy grabbed a puckout from Anthony Nash before setting up Luke Meade and he finished brilliantly to the net, with Mark Coleman landing a sideline from distance to cut the margin to four by the break.

Cork got on top in midfield in the second-half with big performances from Darragh Fitzgibbon and Bill Cooper while Colm Spillane held Conlon scoreless after the restart.

Cork outscored Clare by 0-06 to 0-01 in the opening 13 minutes of the second-half with Harnedy edging them in front for the first time.

Clare never led after that although they got back on level terms 13 minutes from the end when Conor McGrath pointed from the left.

However, it was Cork who struck the next big score when Fitzgibbon, Daniel Kearney and Cooper combined to set up Harnedy and the Cork captain blasted to the net, giving Cork a 2-18 to 2-15 lead with 11 minutes remaining.

Cork got the margin out to four as Clare came searching for the goal they needed to get back in the game but it was too late by the time Ian Galvin found the net in the dying moments.

However Cork were five ahead at that stage and they held on to retain their title for the first time since 2006.