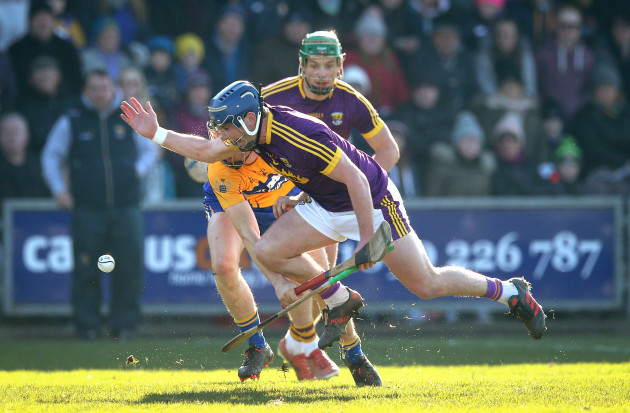 A SECOND-HALF tour-de-force propelled Wexford to safety in Allianz Hurling League Division 1A as Clare endured their first setback at a packed Innovate Wexford Park today.

Clare held a 0-8 to 0-7 lead following a wind-assisted first-half. But Wexford transformed matters decisively to charge clear by 0-17 to 0-9 after 59 minutes en route to a relatively comfortable victory despite Peter Duggan goaling from a late free.

Davy Fitzgerald displayed plenty of sideline animation as he left nobody in any doubt regarding his sentiments for his recent Clare charges as Wexford sought to rebound from the loss to Tipperary and park any relegation worries.

Poor finishing afflicted both sides during a frantic first-half, which saw Wexford seize the early initiative through scores from defender Paudie Foley and Lee Chin (free). But wind-assisted Clare stole clear by 0-4 to 0-2 after 13 minutes with braces from both John Conlon and free-taker Peter Duggan.

Wexford bridged the gap by the 18th-minute courtesy of Conor McDonald and Chin (free). However, the visitors appeared to be building a tidy interval position when pulling clear by 0-7 to 0-4 after 25 minutes as Duggan added two monstrous placed-balls and centre-back David McInerney also registered.

But, as Liam Ryan nipped a potential Clare goaling threat in the bud, late scores from Kevin Foley and Lee Chin (free and a ’65) saw Wexford close to within an extremely satisfactory 0-8 to 0-7 deficit at half-time as they prepared to gain wind advantage.

Clare lost Colm Galvin to injury in the latter stages of he first-half, and while Wexford’s talismanic Lee Chin was forced off owing to injury at half-time, his replacement Rory O’Connor deputised masterfully, the teenager at the hub of matters as the home-side grew in stature during the third quarter.

Goalie Mark Fanning availed of the wind to notch three frees while the O’Connor brothers, Rory (3) and Jack, together with Conor McDonald, Paul Morris (free) and Kevin Foley had the locals amongst the 7,800 attendance in raptures as Wexford surged clear by 0-17 to 0-9 with eleven minutes left.

Peter Duggan (3 frees) and John Conlon arrested the slide somewhat, while Duggan threaded an injury-time free to the net to create some unease for Wexford. Matthew O’Hanlon and Paudie Foley cut out late threats though to ensure Wexford’s third win from four outings and an extension to their top-flight residency.